After eight years of manufacturing the legendary Triton III model we are proud to announce the introduction of the new Triton EVO. The new Triton EVO is not a simple update; it is a totally new re-design featuring new operating systems and circuit protection designs.

All the gain and driver stages have been re-designed and optimized to provide for the shortest signal path and the most direct signal flow. A remarkable, new high performance volume control, a new driver stage choke and new output transformers, have taken the New Ayon Triton EVO to a new level, “State of the Art”.

The Triton III is one of the most successfully integrated Pure Class A amplifiers, globally. Now we have the Triton EVO, the Next Generation in high end audio.

All the gain and driver stages have been also re-designed and optimized as well to provide for the shortest signal path and the most direct signal flow. We have implemented a completely new driver stage, a new choke system, an updated bias system and a new volume control.

All these technical measures and developments have produced the Triton Evo. Revealing a new chapter, the New Benchmark in high end audio, therefor establishing itself as one of the best, if not the best integrated amplifier with four KT150 tubes per channel, regardless of price.

The choice of signal and power tubes have a significant influence on the sound and hence on the inspiration and joy of listening. This is not only the decision between good and bad
tubes but finally the interaction of the different types of tubes and their combination that are used in the various Ayon amplifiers.

We believe that the simplest circuits work best together with the shortest signal path. The shorter the signal path is, the less possibility of sonic degradation from various sources,
including the wire itself. Even on the circuit boards, the copper traces are kept to a very minimum length. The completely redesigned circuit board provides a more straightforward
and direct approach to the signal paths.

The power supplies have been further refined with new components and enhanced AC line noise filtration. Separate power transformers, chokes and filters provide total isolation
between the input and output stages which makes this a pure power source. We also use electrolytic capacitors with much larger storage capacity to make up for the loss in filtering
when using resistors in lieu of inductors.

The modification of the grounding topology leads to increased rejection of noise from the power supply and other areas. The dual grounding topology used in all of our amplifiers is
quite unique to the whole hi-end tube amplification industry. Such extensive topology provides for quieter backdrop for which the music can unfold in its entirety. It further
establishes the quick and controlled bass response and the full-bodied expression of the high frequency. The ground leg of the signal has not been neglected and given meticulous
attention in its implementation. The importance of proper grounding cannot be over emphasized.

The super-wide bandwidth output transformer’s major strength is that it can deliver the current in the bass, while at the same time maintaining the speed in the high frequencies,
dramatically improving the square wave response of the amplifier. The effect is a much more natural and relaxed sound with much better clarity, resolution and fluidity.

The type of parts used therefore must have a synergistic relationship to the circuit they are placed in. It is this relationship of which type of part to use where, that ranks our products apart from the mass.

The high-grade aluminum chassis impart a richer, more lustrous tonality with a cleaner background and less hash and grain. All brushed anodized anti-vibration-resonance and
non-magnetic chassis’s are fully hand assembled to insure the highest level of craftsmanship.

Specifications subject to change without notice

Please request a Password from your distributor, dealer or Ayon Audio. Also indicate in which country the device is operated, as well as the model name and the serial number. 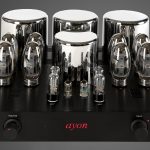 Return to Ampliers
×
Scroll To Top